Revitalizing Indigenous stories and culture at Waasayishkodenayosh and the Port Lands

Image courtesy of the Mississaugas of the Credit First Nation

The Anishinaabemowin name for the Don River is thought to be Waasayishkodenayosh. It was also known as the more anglicized version Wonscotonach. There are several translations that include burning bright point, black burnt ground or the river coming from the black burnt ground.

Adjacent to the Don River, there is ongoing construction in the Port Lands aimed at cleaning and restoring contaminated soils and naturally accommodating the effects of flooding and erosion. In the process, we’ll re-establish aquatic and terrestrial habitat where Indigenous species of plants and animals can thrive. A renaturalized mouth for the Don River will help restore a piece of the natural ecosystem that was lost years ago.

More than building a river mouth, the Port Lands Flood Protection project team is building relationships with Indigenous partners and consultants as they design and construct public space together.

We hope that this massive project can, in part, be an act of reconciliation and healing. Through the experience of nurturing the new river valley we hope to establish healthy and inclusive relationships with the land, water, living beings and the community for future generations.

Learn more about opportunities for Indigenous designers, artists, and architects.

For thousands of years, the mouth of the river now known as the Don River was an important gathering place of Indigenous people who lived in the region. It was a fertile wetland and fishing ground that was vital to the Mississaugas as sustenance was derived from fish, wild rice and other aquatic flora and fauna. The mouth of the Don River is within the Treaty and Traditional Territory of the Mississaugas of the Credit First Nation (MCFN) and was also historically inhabited by many other Indigenous people including the Anishinaabe, Haudenosaunee, and Huron Wendat peoples.

Water has played an integral role in the culture of the Mississaugas for countless generations and is regarded as the life blood of Mother Earth. The centrality of water in the worldview of the Anishinaabe is reflected in their ceremonies, stories and songs. 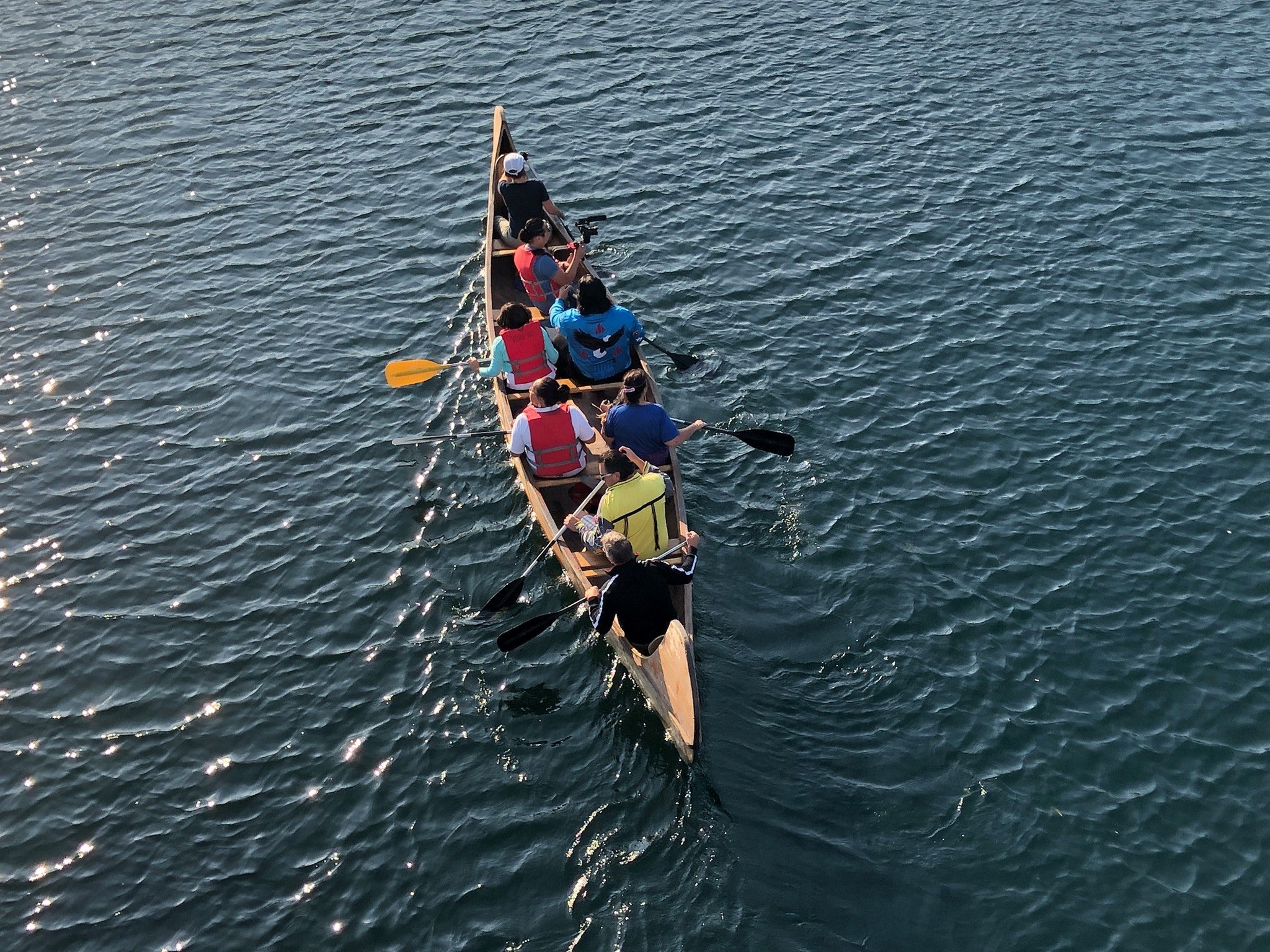 The rivers, lakes and waterways were a vital connection to Indigenous communities and peoples traveling throughout the Great Lakes region. Toronto and the surrounding area remain home to a large, vibrant and diverse Indigenous community. Image courtesy of the Mississaugas of the Credit First Nation.

In the early 1900s, Toronto filled in the Ashbridges Bay marsh, now known as the Port Lands, to make space for a growing industrial port and redirected the Don River with an unnatural ninety-degree turn down the concrete-lined Keating Channel. This history of settlement and lake-filling at the mouth of the Don River is a story of the damage of colonialism, expansionism, and disregard for land, water, and life.

Learn more about the post-colonial history of the Port Lands here.

New parks in the Port Lands will include Indigenous species of plants.

Now, Waterfront Toronto is in the process of reinstating a naturalized river mouth for the Don River as part of the Port Lands Flood Protection Project. The project will create a new island in the harbour’s archipelago, establish a new river valley with functional wetlands, and deliver 32 hectares of new greenspace, including natural habitats within the new river and fish coves.

In a collaborative process with MinoKamik Collective and the Mississaugas of the Credit First Nation, the design team for the Port Lands Flood Protection project has met with Elders and representatives from Indigenous nations and organizations in and around Toronto.

In these meetings, the team heard that the restoration of the mouth of the Don River and the creation of new parks and open spaces offers the opportunity to showcase Indigenous histories, resilience, and interconnectedness to the natural environment. They also heard that the new parks and river mouth should highlight local Anishinaabe traditions, stories and culture. The restoration of habitat and the cultivation and stewardship of Indigenous plants, and particularly traditional medicines, was of great importance to the participants. 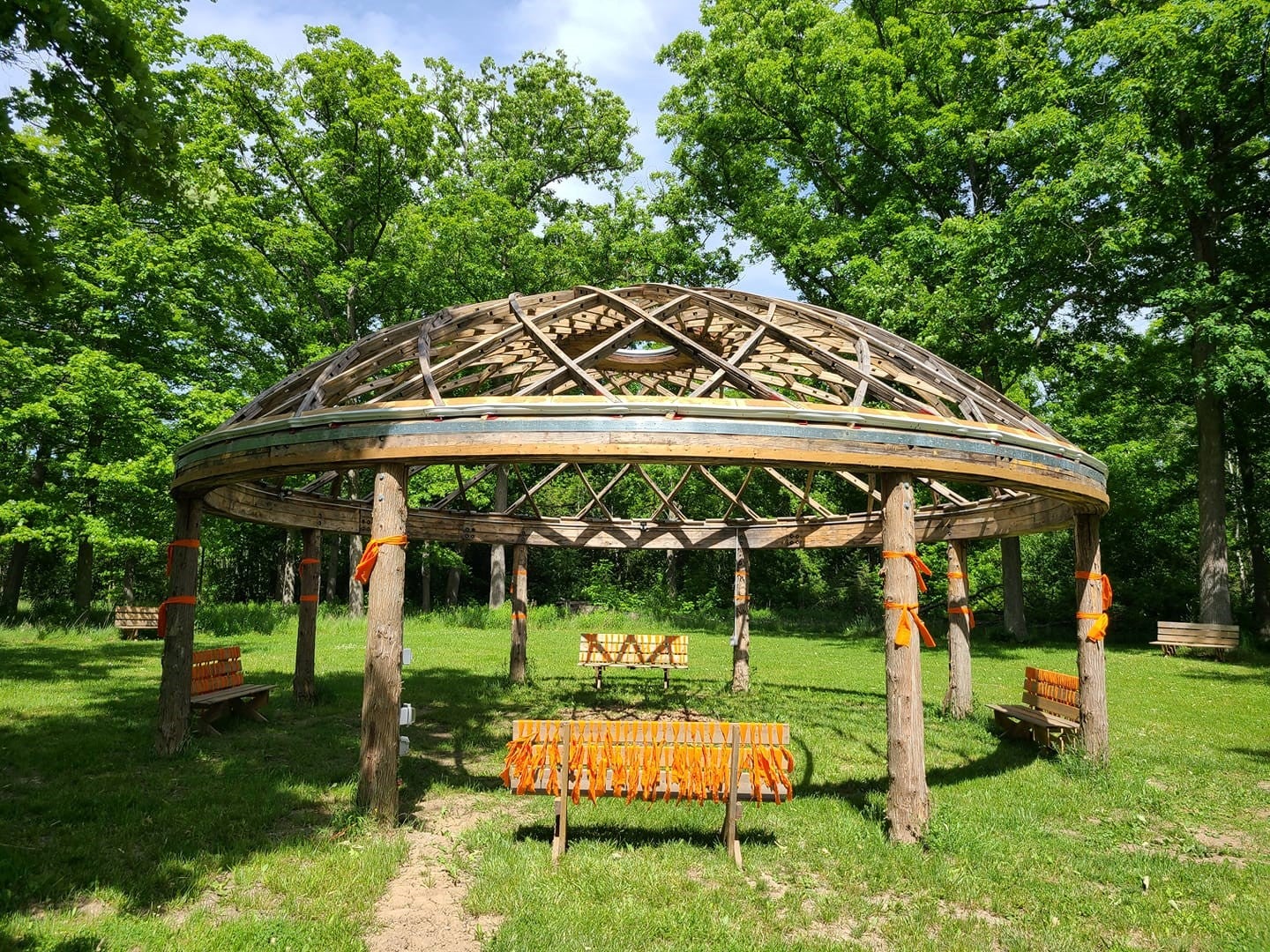 This structure is precedent for one of the potential new park features in the Port Lands that will reflect Indigenous culture. Image courtesy of the Mississaugas of the Credit First Nation.

One of the ways we’re acting on this feedback is by commissioning five original park features that will reflect Indigenous stories, identities, and culture.

In 2022, we started the process to engage Indigenous designers, artists, and architects in the creation of these features. The first step was a Request for Pre-qualification, which is open until October 13, 2022.

If this opportunity interests you, or someone you know, more information can be found here.