Like most major cities, Toronto is located beside a major body of water. Throughout history, cities have been founded at the intersections of transportation routes, or at points where goods needed to shift from one mode of transportation to another. For centuries,  oceans, lakes, and rivers have provided an important means of transport.

Toronto’s location on Lake Ontario, the first Great Lake from the St. Lawrence River, has been instrumental over the course of the city’s history. Long before Europeans came to the area, Toronto was home to Indigenous Peoples who used this location as the start of a shortcut from the lower to upper Great Lakes.

Waterfront Toronto acknowledges that the land upon which we are undertaking our revitalization efforts is part of the traditional territory of many nations including the Mississaugas of the Credit, the Anishnabeg, the Chippewa, the Haudenosaunee and the Wendat peoples and is now home to diverse First Nations, Inuit and Métis peoples. We also acknowledge that Toronto is covered by Treaty 13 with the Mississaugas of the Credit.

While the French knew about the Toronto passage from the early 1600s and had occasionally set up trading camps along it, it was not until the 1720s that they maintained a permanent presence in Toronto. In 1720, the French built a small trading post on the Humber River on the south end of the passage. In 1750, they began building Fort Rouille, a modest trading post on the Lake Ontario shoreline, just east of the Humber.

After the American Revolution, Toronto gained importance as a site to expand the fur trade and as a settlement. The British, concerned about threats from the United States, decided that Toronto would be an ideal site for a naval base. Governor John James Simcoe believed the area’s defensible harbour would allow his forces to control Lake Ontario, and the Toronto passage would enable the movement of supplies and troops to the upper lakes if the Americans gained control of Lake Erie. The construction on Fort York started in 1793 and is now considered the birth of urban Toronto.

Since much of the city’s major trade has historically been by boat, having manufacturing facilities adjacent to the waterfront made good business sense. Factories on the lakeshore allowed supplies to be easily received and finished products to be effectively transported. However, by the 1830s and ‘40s, the lack of available land along the waterfront severely limited the growth of the shipping and industrial and railway infrastructure.

In the 1850s, a massive campaign of lake-filling was undertaken to expand the shore land south to the Esplanade. For the next hundred years, the shore was extended farther and farther south. The original shoreline was north of today’s rail corridor, and Front Street was built along the edge of the shoreline. The filling continued until the 1950s when the modern shoreline was achieved.

After the Second World War, Toronto’s relationship with its waterfront changed. With industry concentrated along the waterfront, the downtown core became undesirable as a place to live. For decades, the wealthy moved from the industrial urban areas to the cleaner suburbs.

As cars became more accessible to more people, Toronto residents moved out of the downtown core to the outlying areas. However, since many of the jobs were still in downtown industrial areas, major roads and highways were needed to enable people to commute.

At the time, highways were built as rings around cities. For most cities located beside water, a portion of that ring was built on or near the waterfront. Toronto was no different, and in the 1950s the Gardiner Expressway was built, effectively cutting the people off from the lake.

In the 1970s, a sort of Urban Revolution was changing the world, and cities started to rediscover their waterfronts. Major cities around the world not only redeveloped their waterfronts, they used their regeneration projects to catapult themselves onto the world stage. Their newly developed waterfronts attracted more residents, more employers, more jobs and more visitors.

Toronto is one of the last major waterfront cities to redevelop its waterfront. Over the years, there have been many ideas about what to do with Toronto’s waterfront but a cohesive vision was missing. Harbourfront Centre, Queens Quay Terminal, and the surrounding area are the result of one effort to redevelop the Central Waterfront in the early 1970s.

In 1999, Prime Minister Jean Chrétien, Premier Mike Harris and Mayor Mel Lastman announced the formation of a task force to develop a business plan and make recommendations for developing the waterfront as part of Toronto’s bid to host the 2008 Summer Olympics.

Chaired by businessman Robert Fung, the task force determined that waterfront revitalization was necessary, that it was “an almost unprecedented development opportunity” and would have “a major, positive economic impact on the City, the region and the country.”

The task force said that the revitalization was not merely a public megaproject but rather “an integrated partial solution to the environmental, transportation, infrastructure, housing, economic and tourism challenges confronting the City.”

The task force also stated that the need and business case for the redevelopment of Toronto’s waterfront was so strong that irrespective of the Olympic bid waterfront renewal should happen.

After the 2008 Olympics were awarded to Beijing, the three orders of government pledged their support to the revitalization of Toronto’s lakefront.

In November 2001, the three levels of government established Waterfront Toronto (then known as the Toronto Waterfront Revitalization Corporation) to oversee all aspects of the planning and development of Toronto’s central waterfront.

In May 2003, the provincial government enacted the Toronto Waterfront Revitalization Corporation Act, creating a permanent independent organization to oversee and lead the renewal of Toronto’s waterfront.

Waterfront Toronto, together with the City of Toronto, developed a comprehensive Archaeological Conservation and Management Strategy (ACMS). The strategy is designed to protect and interpret the archaeological record of the waterfront, and also to develop policies and protocols to manage these archaeological resources in advance of the major construction required for revitalization.

Developed with the support of stakeholders and members of the general public, the ACMS has helped establish innovative policies for both Waterfront Toronto and the City of Toronto. Besides identifying areas where potential archaeological resources are likely to be found, it has also highlighted the importance of celebrating cultural heritage and interpreting the past including, the evolution of the shoreline, Aboriginal occupations, as well shipping, the railway, and the industrialization of the waterfront.

Waterfront Toronto retained Archaeological Services Inc. to prepare the ACMS that serves to:

To learn more about archaeology in Toronto, visit City of Toronto Archaeology. 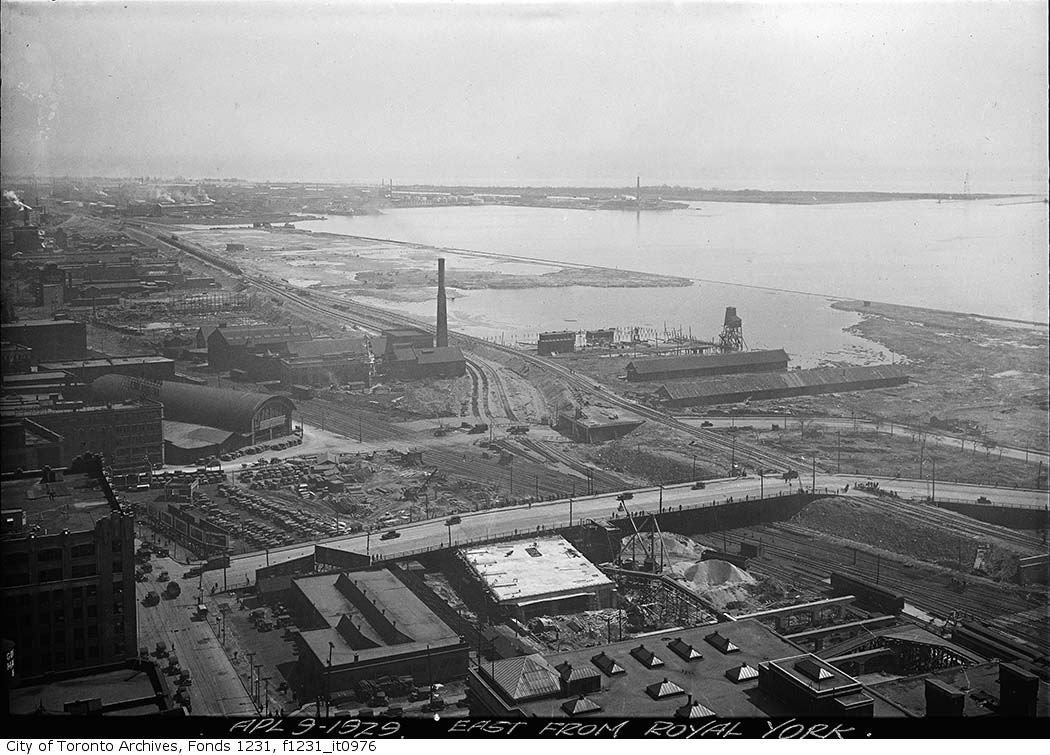 In the heyday of marine shipping, the waterfront was bustling with commercial activity and the growing demand for facilities led to extensive land filling. Two hundred years ago the natural shoreline of Lake Ontario was at Front Street, and all of today’s central waterfront area was created by decades of lake infilling.

With the subsequent decline of shipping and the rise of truck transportation, these large waterfront areas became less useful for industrial purposes, and new visions for their use were needed. 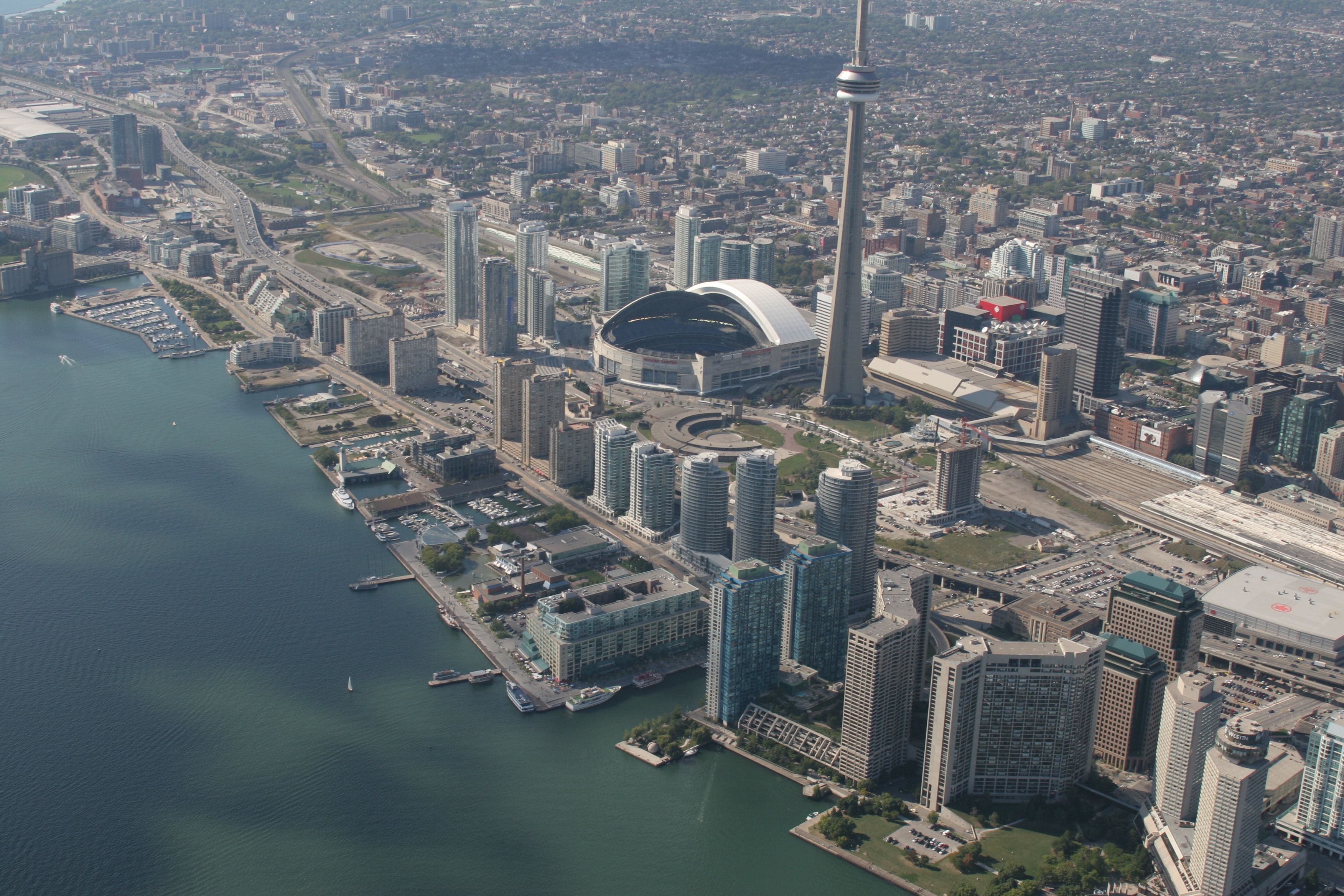 The Port Lands – a 356 hectare (880 acre) area east of the city’s downtown between the Inner Harbour and Leslie Street, south of Lake Shore Boulevard – are located on what was once the largest natural wetland on the Great Lakes.

The Ashbridges Bay Marsh was created by the lower Don River as it emptied into Toronto’s inner harbour. The landscape in the area was dramatically altered in the late 19th and early 20th centuries. The Don River and the marsh it created posed many problems for the adjacent settlement of York and starting in 1870 a series of breakwaters, channels and other man-made structures were created to manage the area. Most failed or caused additional problems and in the 1910s plans were developed to change the area permanently.

In 1912, the Board of the Toronto Harbour Commission completed a plan for transforming Ashbridges Bay Marsh into a massive new industrial district with waterfront parks and summer homes. The mouth of the Don River was redirected into the concrete-lined Keating Channel in 1914 and infilling of the surrounding wetlands began. By 1922, more than 200-hectares (500-acres) of land had been created on the former marsh, with another 200-hectares soon to follow. These lands were quickly occupied by industry and plans for a major waterfront park and adjoining cottage community were never realized. After the Gardiner Expressway was built in the 1950s, the mouth of the Don River became lost amidst a tangle of off-ramps, bridges and abutments. Access to the river was virtually cut off. Over the past three decades, public calls for the naturalization of the mouth of the Don River have grown steadily stronger.

East Bayfront was formally Lake Ontario marshland that was in-filled in the 1950s, during the last stage of the Toronto Harbour Commissioners’ 1912 plan for a waterfront industrial park. The lands were developed as the Queen Elizabeth Docks by the Toronto Harbour Commission for industrial and marine transport-related purposes, in anticipation of an increase in port activity with the opening of the St. Lawrence Seaway.

Historically, the East Bayfront property was used primarily as a marine freight transfer facility under the Toronto Harbour Commission, and by Canadian Pacific Express and Transport Ltd. and others.

The evolution of downtown Toronto and changes in the goods movement industry has meant that the area no longer functions as a busy industrial port.

Today, approximately 70% of the East Bayfront precinct land area is in public ownership, presenting an exciting opportunity for a comprehensive mixed-use community that will be integrated within Toronto’s urban fabric.

Historically, the West Don Lands was part of the Old Town of York, established by John Graves Simcoe in 1793.

"The Park,” as it was referred to on early maps, extended from Berkeley Street to the Don River as far north as Queen Street. It remained intact until the 1830s when it was subdivided and sold to finance the new provincial hospital. The Park was connected to the larger Garrison Reserve to the west by a shoreline promenade known as the Walks & Gardens. The only evident industrial uses dating to this period were the earliest brickyards.

The first non-government building on the West Don Lands portion of the park reserve was Gooderham’s 1832 windmill that evolved into the Gooderham & Worts Distillery. Associated uses followed such as cattle byres, harness making, and cooperages. Enoch Turner’s brewery on Taddle Creek near Parliament was an employer that attracted a considerable work force, and housing was quickly established in the surrounding area.

The arrival of the railways in the 1850s hastened the industrialization of the eastern waterfront. Maps from this period show gasometres, rail yards, roundhouses, work yards, abattoirs, foundries, lumber yards, and a large number of houses.

Over the years, the Don River which ran through the area was straightened, Taddle Creek was buried, marshes were filled in and land was levelled.

The 20th century brought refineries, rail yards, cement works, scrap yards, steel fabricators, salt storage, varnish factories, foundries, lumber yards, and automotive uses. With the pressure of railway expansion in the area, most of the residential uses left the site. As the city continued to expand, many of the industries relocated to the suburbs, or closed, leaving behind a number of buildings that are recognized today for their heritage value and large amounts of open space. The provincial government took title of the West Don Lands in 1996.