Located at the foot of Lower Jarvis Street adjacent to the Redpath Sugar Factory, the 8500 square metre (2 acre) park is the first public space visitors see as they travel along Queens Quay from the central waterfront. The park’s brightly coloured pink beach umbrellas and iconic candy-striped rock outcroppings welcome visitors to the new waterfront neighbourhood of East Bayfront.

The design for Canada’s Sugar Beach, by Claude Cormier + Associés draws upon the industrial heritage of the area and its relationship to the neighbouring Redpath Sugar factory. The park features three distinct components: an urban beach; a plaza space; and a tree-lined promenade running diagonally through the park.

Canada’s Sugar Beach reminds us that Toronto’s waterfront is a playful destination. The beach allows visitors to while away the afternoon as they read, play in the sand or watch boats on the lake. A dynamic water feature embedded in a granite maple leaf beside the beach makes cooling off fun for adults and children.

The park’s plaza offers a dynamic space for public events. A large candy-striped granite rock outcropping and three grass mounds give the public unique vantage points for larger events and the spaces between the mounds result in a natural performance space for smaller events.

Between the plaza and the beach, people can stroll through the park along a promenade featuring granite and tumbled concrete cobblestones in a maple leaf mosaic pattern. Lined with mature maple trees, the promenade offers a shaded route to the promenade along the water’s edge, providing the public with many opportunities along the way to sit and enjoy views to the lake, beach or plaza.

Canada's Sugar Beach promenade and plaza have been designed to be fully accessible to people with disabilities.  In an effort to improve accessibility to the beach, Waterfront Toronto has added a boardwalk, level with the sand to some of the park's signature pink beach umbrellas and Muskoka chairs.

One of the park’s signature design elements is the oversized granite rock formations located on the beach and in the plaza space next to Corus Quay. The rocks, which feature candy-coloured stripes made of a flexible and durable thermoplastic, add to the whimsical feel of the park.

The granite rocks were chosen from a quarry in northern Quebec by Waterfront Toronto and the park’s design team. The granite was then sliced into 1.5 metre-wide pieces using an industrial strength saw, categorized and trucked to the park site. Much like putting together a jigsaw puzzle, crews used a 165-tonne crane to assemble the rock outcropping piece by piece on site. The granite outcropping at the beach is over six metres long and wide, and about one metre high. The second rock outcropping at the plaza is more than double the size of the rock at the beach. These signature granite outcroppings will be used as informal seating, play and gathering spaces.

Canada’s Sugar Beach has two important neighbours – Redpath Sugar to its west across the Jarvis Slip and Corus Quay, the headquarters for Corus Entertainment on its eastern edge. The park’s design bridges the gap between old and new by celebrating Redpath’s important industrial heritage and the new creative vibe Corus Entertainment brings to the waterfront. All summer long, Corus employees spill out into the park using its unique plaza space for concerts, film screenings and other live events against a backdrop of large freighters docking in the slip to deliver sugar to Redpath. 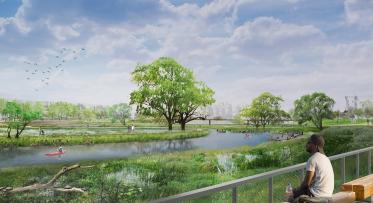 Parks for the Twenty-First Century

We're building heavily-designed infrastructure, engineered to protect hundreds of hectares from flooding. Integrated into this infrastructure will be a series of connected aquatic, wetland, and terrestrial habitats.
Read Article
Banner

Toronto’s waterfront is getting its first cabane à sucre next month, complete with maple taffy and traditional French Canadian music and food. The Sugar Beach Sugar Shack is a free event for families, visitors and anyone who loves maple syrup.
Read Article
Banner 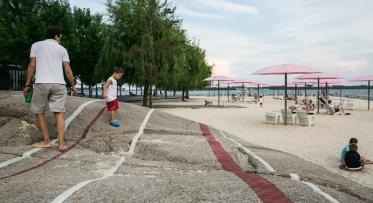 From the Archives: Canada's Sugar Beach

This once lakefront parking lot has been transformed into a unique urban space that raises the bar for city-building and set a new standard for the creativity of design and quality of materials.
Read Article