Two waterfront projects have received Toronto Urban Design Awards for 2013. Sherbourne Common and the George Brown College Waterfront Campus – located in the heart of Waterfront Toronto’s emerging East Bayfront neighbourhood – were each honoured with an Award of Merit.

The City of Toronto’s Urban Design Awards acknowledge the significant contribution that architects, landscape architects, urban designers, artists, design students, and city builders make to the look and livability of our city. Sherbourne Common was honoured in the ‘Large Places or Neighbourhood Designs’ category and the George Brown Waterfront Campus earned its award in the ‘Public Buildings in Context’ category.

“Sherbourne Common sets a high standard in urban park design through its sophisticated integration of design, art and engineering,” noted the jury in its comments. “As more residential buildings emerge around the park, Sherbourne Common will serve an increasingly important role as an oasis in the heart of the city.” 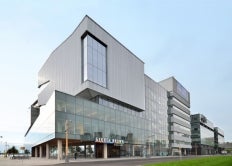 Sherbourne Common is an ideal neighbour for the George Brown College Waterfront Campus where students spill out into the park’s large open lawn and enjoy views of the park from its three-storey glass podium. The jury noted that the campus, designed by Stantec Architecture/KPMB Architects in Joint Venture, “is a bold and expressive addition to the Toronto waterfront.”

Since 2005, Waterfront Toronto has received ten Toronto Urban Design Awards and more than 30 design awards overall. Design excellence is part of Waterfront Toronto’s vision of transforming the city’s waterfront into beautiful and sustainable new communities. To help achieve and uphold its standards for design excellence, Waterfront Toronto hosts international design competitions, works with some of world’s top architects and landscape designers and incorporates urban design as an important component in its environmental assessment process. 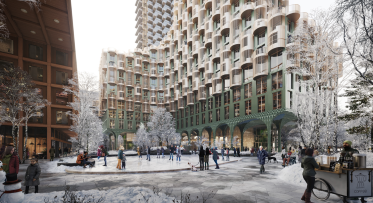 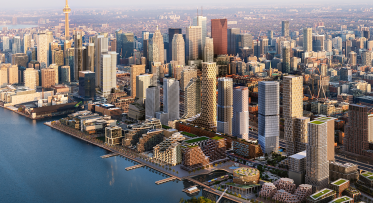 Waterfront Toronto today launched an international competition to secure a development partner for the Quayside lands. The first step in this effort is to issue a Request for Qualifications (RFQ) to identify potential development proponents with the proven experience, design portfolio, financial...
Read Article
Banner

To pursue a vision for an inclusive waterfront for all, Waterfront Toronto continues to expand its relationship with Indigenous peoples and involve them directly in waterfront revitalization. In August of this year, an open call was issued seeking an Indigenous Design Expert to join the Design...
Read Article