East of Lower Sherbourne Street,
from Lake Shore Boulevard to them water's edge,
on both sides of Queens Quay

Sherbourne Common has transformed a former industrial area into much needed public greenspace on the lake. It is also the first park in Canada to integrate a neighbourhood-wide stormwater treatment facility into its design.

Located just east of Lower Sherbourne Street, the 1.5-hectare park spans more than two city blocks, from Lake Ontario in the south to Lake Shore Boulevard in the north, on both sides of Queens Quay.

Sherbourne Common was designed by renowned landscape architects PFS Studio to bring a feeling of "life at the lake" to the area. The park features a wide open greenspace, a skating rink that doubles as a splash pad in the summer, a zinc-clad Pavilion, and a playful water channel fed by three dramatic art sculptures. Sherbourne Common has become a well-used destination for city residents and visitors all year round.

Description
Five areas designated for pedestrians to cross the channel

More than a park

Sherbourne Common is the first park in Canada to integrate an ultraviolet (UV) facility for neighbourhood-wide stormwater treatment into its design. The UV facility for East Bayfront’s stormwater management system is located in the basement of the park’s Pavilion. Collected stormwater is treated in the UV facility and released from three art sculptures into a 240-metre long water channel – an urban river that crosses from Sherbourne Common north to south – and back out to Lake Ontario.

Sherbourne Common features a number of sustainability best practices. Examples of sustainability features incorporated into the park’s design include easy access to public transportation, storage for bicycles and other alternative means of transportation, reduction of light pollution, water efficient landscaping as well as renewable energy sources for the park’s Pavilion. The Pavilion will also be pursuing LEED Gold certification for the building which is in line with Waterfront Toronto’s mandatory Green Building Requirements.

One of the park’s well-loved design features is a 240-metre long water channel fed from three matching art sculptures that rise almost nine metres from the ground.  The art piece, called “Light Showers,” was created by artist Jill Anholt using large fibreglass molds reinforced with an epoxy-covered rebar and filled with agila concrete. After the concrete cured, the sculptures were carefully removed from the molds, craned on the site and installed on concrete floorings.

Award-winning architecture in the park

Waterfront Toronto’s Pavillion in Sherbourne Common south received an Award of Merit from the 2009 Canadian Architect Awards of Excellence. Learn more about the award.

During the winter, the park includes a 920-square metre skating rink with views of Lake Ontario and Toronto’s downtown skyline.

The skating rink was designed as an outdoor neighbourhood facility. A seating wall surrounds the eastern and western edge of the rink and rubber mats have been installed to make it easier to lace up. As the community develops, there will be amenities surrounding the skating rink.

The park has been designed to be fully accessible for people with disabilities. There are no steps in the park and all of the water channel crossings are flush to the ground. In addition, the drinking fountain located along the main path in the north portion is designed specifically for wheelchair access. The washroom facilities located in the park's pavilion are also wheelchair accessible.

Sherbourne Common was selected as the winning name for East Bayfront’s signature waterfront park following a public naming contest sponsored by Waterfront Toronto and Torontoist in 2010.

During the contest, more than 500 names were submitted and thousands of people voted online. The new name, submitted by Doug Dent, incorporates the park’s location at the foot of Lower Sherbourne, with the idea of ‘the commons’ where park spaces belong to the people. 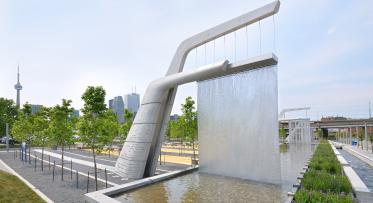 From the Archives: Sherbourne Common (North)

In this edition of From the Archives, we explore the transformation of the north side of Sherbourne Common from an industrial area to one of Toronto's most unique public spaces.
Read Article
Banner 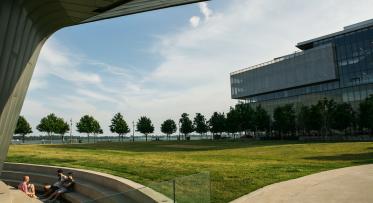 From the Archives: Sherbourne Common (South)

In this edition of From the Archives, we explore the transformation of the south side of Sherbourne Common from an industrial area to one of Toronto's most unique public spaces.
Read Article
Banner