Toronto’s wavedecks offer a unique way to experience the water’s edge in the central waterfront.

Located at the head of the Simcoe, Rees and Spadina slips along Queens Quay, these three urban docks are both beautiful and functional. Designed by West8 + DTAH, the wavedecks were built out over the water creating generous new public spaces in areas where sidewalks were narrow and congested.

The wavedecks’ whimsical and dynamic design – inspired by the undulating shorelines of Ontario’s Great Lakes – have made them some of the waterfront’s most interesting public spaces.

Description
The City of Toronto is the owner and the City Parks Department provides maintenance and operation of the public space.

The wavedecks incorporate many features to ensure that people of all ages, including those with disabilities, have access to these unique public spaces. All three wavedecks are accessible from all sides and include an accessible route marked by a stainless steel disc pathway.

Simcoe and Rees include large barrier free zones at the east side of each deck with an accessible route between toward the water.

Other accessibility features include:

Since opening in late 2008 and early 2009, the wavedecks have garnered nine awards or nominations from the local, national and international design community.

The Spadina WaveDeck has been the recipient of numerous prestigious awards including a Toronto Urban Design Award. It was also the first Canadian project ever to be short-listed for the world-acclaimed Brit Insurance Design Awards.

The Simcoe WaveDeck has been honoured with a variety of prestigious awards and was nominated for an Innovation and Design Award by Conde Nast Traveller, a renowned travel magazine.

The Rees WaveDeck has been honoured with several awards including a Bronze Medal for Landscape Design from the Design Exchange.

The construction of the WaveDecks created a total of 1,780 square metres of new high quality, diverse fish habitat. Riverstone shoals, tree logs and embankments were installed to provide shelter and increased feeding and forcing opportunities for lake fish. Aquatic Habitat Toronto, of which Waterfront Toronto is a partner, has won a Public Sector Quality Fair award for the aquatic habitat enhancement work being done on Toronto’s waterfront.

Recent monitoring results have shown an increase in the number of fish species caught in the harbour.

Learn more about our efforts to improve aquatic habitat. 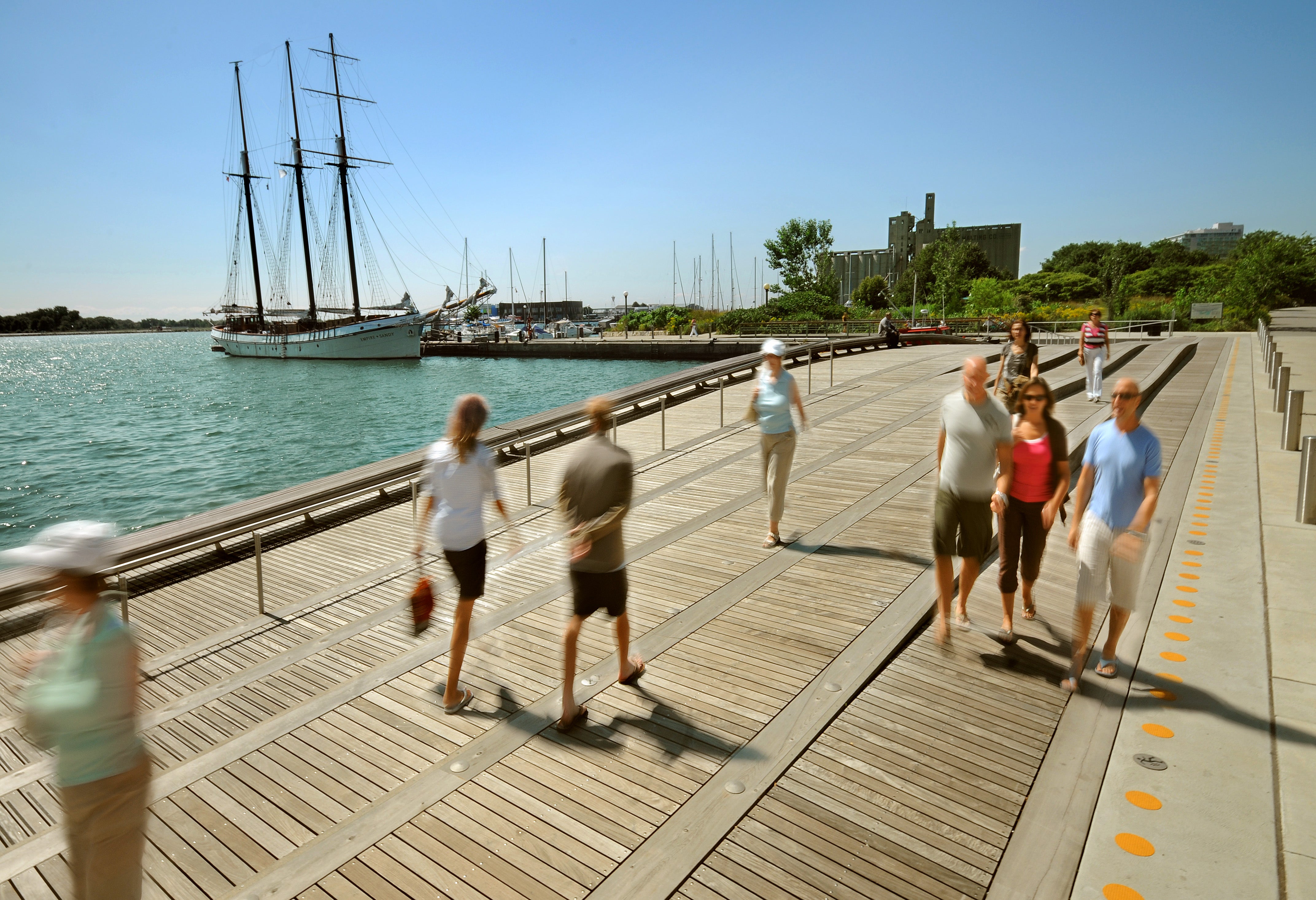 The first in a series of unique new waterfront public spaces, the Spadina WaveDeck is an elegant symbol of waterfront revitalization.

As the first wavedeck to open along Toronto’s waterfront in 2008, the Spadina wavedeck is an important symbol for waterfront revitalization. Located at the foot of Spadina Avenue, the 630 square-metre wooden wavedeck transformed a narrow sidewalk into a new waterside gathering place. It created more public space along one of the most heavily used parts of the Toronto shoreline and helped connect two key waterfront amenities, the Music Garden and HtO Park.

The impressive public space offers people a place where they can relax by the lake. The upper crest of the wavedeck offers broad views of both the lake and the city.

In addition to amphitheatre-style seating on the steps of the wavedeck, a 57-metre backless bench creates a perfect place to relax and gather by the lake. 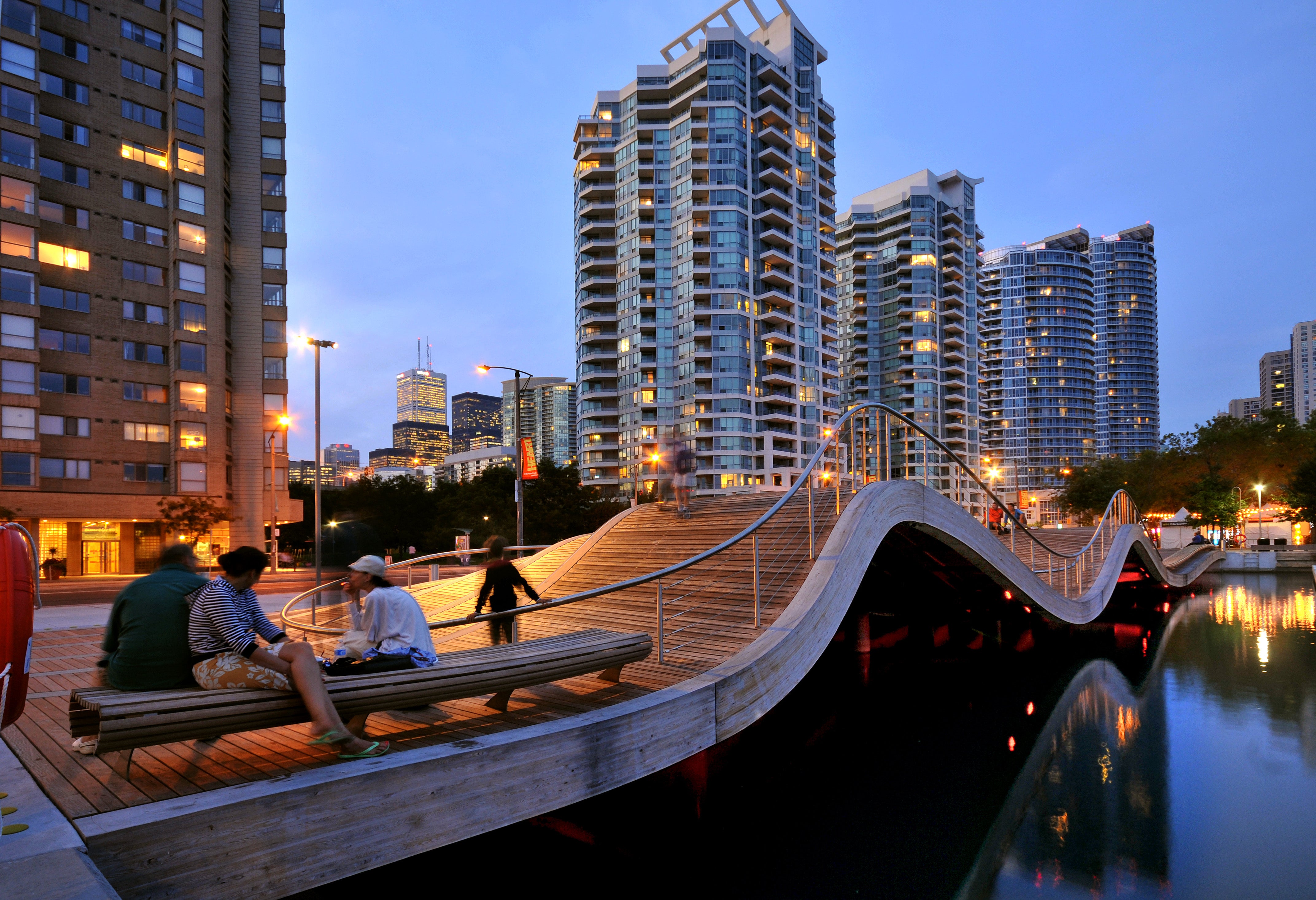 The most dramatic of the wavedecks along Toronto’s downtown waterfront, Simcoe has become a must-see Toronto attraction.

Located just west of Simcoe Street, the Simcoe wavedeck features an informal public amphitheatre-style space that can accommodate with impressive curves that soar as high as 2.6 metres above the lake.

The Simcoe WaveDeck created new public space at the water’s edge by replacing a narrow sidewalk with a grand waterside gathering place. People of all ages may enjoy views of the harbour from its 30 metre-long backless bench, use its steps as a place to eat lunch and take pictures sliding along its graceful curves.

The 650-square metre structure features two large swells with slender stainless steel railings that follow the undulations of the waves in the deck. These railings are designed to differentiate the curved portions of the deck and help visitors negotiate the slopes. 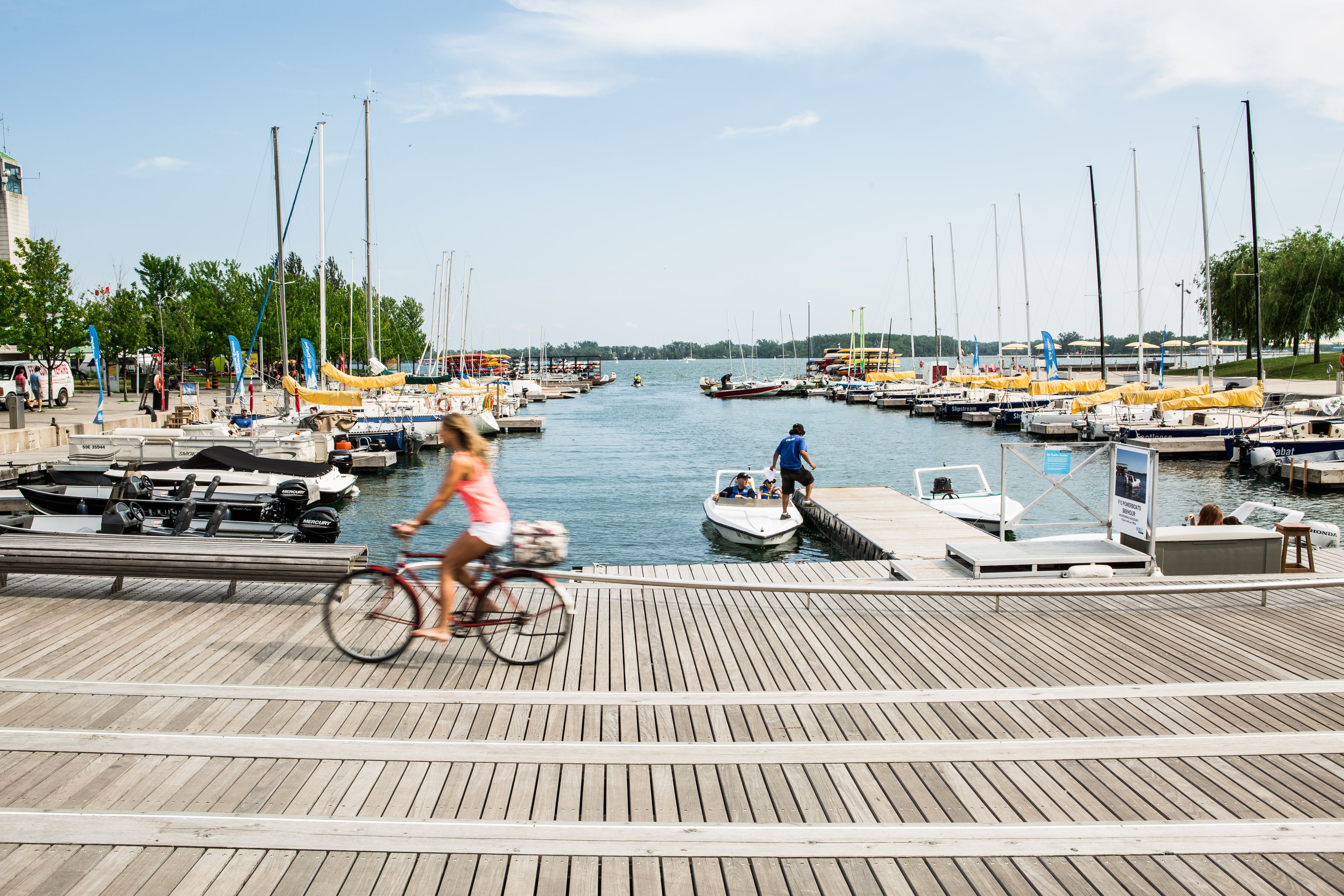 One in a series of iconic urban docks, the Rees WaveDeck is a stunning addition to Toronto’s waterfront.

Completed in 2009, the Rees wavedeck was the third urban dock built to create more public space along one of the most heavily used parts of Toronto's shoreline. Located just west of Rees Street on the south side of Queens Quay, the 480 square-metre wavedeck is both a piece of art and a functional gathering space. The stairs act as an informal amphitheatre and the varying heights of the deck allow for different vantage points and ultimately different experiences with the lake.

At Rees, the wavedeck dips gracefully towards the water allowing the public to get so close to the water they can almost touch it. Boating clubs in the slip also benefit from the new wavedeck which offers an amphitheatre-like space for outdoor education. A portion of the toe rail at the centre of the deck is removable to accommodate boarding of small boats from the wavedeck. 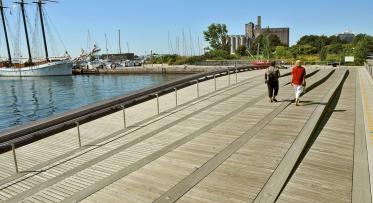 The Spadina WaveDeck has received a Certificate of Merit as part of the 2010 National Urban Design Awards.
Read Article
Banner 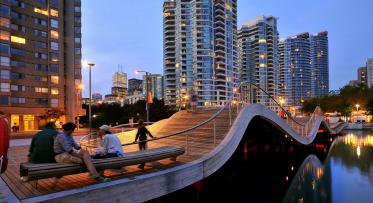 Toronto, June 12, 2009 - Waterfront Toronto, together with the Government of Canada, Province of Ontario and City of Toronto, officially opened the Simcoe WaveDeck, the second and most dramatic urban dock being built along Toronto’s central waterfront.
Read Article