Queens Quay is the main east-west thoroughfare along the waterfront and as such, it will be the "main street" for the new East Bayfront community.

The new Queens Quay will feature two lanes of east-west traffic on the north side of the street with a dedicated Light Rail Transit (LRT) line in the middle. On the south side, a generous granite mosaic pedestrian promenade defined by a double row of trees will run alongside an off-street Martin Goodman Trail. Businesses and condominiums on the north side of the street will front onto sidewalks with granite curbs and a row of mature trees.

Queens Quay will provide the kind of atmosphere conducive to economic vitality, ground floor retail activity and urban vibrancy. It will become an iconic street that is as beautiful as it is functional. This new world-class street will link major destinations along the water’s edge, create pedestrian and cycling-friendly promenades and transform the area into a vibrant destination for locals and visitors alike.

The vision for Queens Quay

In 2006, Waterfront Toronto launched the Central Waterfront Innovative Design Competition for the central waterfront which included the East Bayfront area. As part of its winning design, West 8 + DTAH proposed a design for Queens Quay that would make it a signature boulevard by reducing the number of lanes of traffic to allow for a generous tree lined pedestrian promenade, cycling connections and much improved landscaping in the area.

While Waterfront Toronto was an advocate of the winning design, we fully supported the statutorily-required Class Environmental Assessment (EA) process which had to occur before any work on Queens Quay could begin. Learn more about the Revitalization of Queens Quay EA

Linking the gap in the Martin Goodman Trail

The Martin Goodman Trail, a 56 kilometre multi-use recreational trail, is currently disjoined as it passes through the centre of the city. Waterfront Toronto’s plans for revitalizing Queens Quay will connect the trail. Cyclists will be able to travel along a generous, four metre-wide, off-street Martin Goodman Trail from Lower Spadina Avenue all the way through East Bayfront to Parliament Street where the trail continues along Lake Shore Blvd.

Read the Environmental Study Report (ESR) to learn more about the evaluation and decision making process used to reach the recommendations of the East Bayfront Transit EA Study. 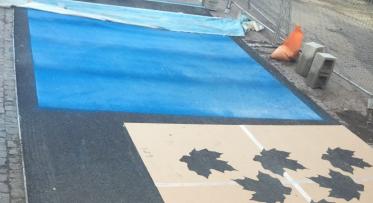 Martin Goodman Trail: The Fences Are Coming Down

This Saturday, crews will begin to open sections of the Martin Goodman Trail on Queens Quay, starting at Bay and moving west.
Read Article
Banner 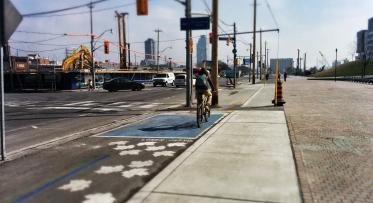 What’s Up With Those Hydro Poles in the Middle of the Martin Goodman Trail?

People who bike the Martin Goodman Trail east of Yonge Street have noticed, and complained, of a number of hydro poles recently installed in the middle of the bike path. Here’s what’s going on.
Read Article