From Norris Crescent Parkette in the west,
to Humber Bay Park West in the east,
along the shore of Lake Ontario

Mimico Waterfront Park provides over a kilometre of beautiful new shoreline park space in a part of Toronto’s western waterfront that historically lacked public access. The public can now enjoy recreational activities along the multi-use trail and enhanced shoreline, which provides a stunning water’s-edge route to walk, cycle or skate through the neighbourhood.

A unique and accessible urban gem, the meandering park not only enhances the area and connects the local community to the lake, but also helps to re-establish Mimico as a recreational destination for the entire city to enjoy.

Description
1.1 kilometres along the water’s edge

Waterfront Toronto, in partnership with Toronto and Region Conservation, opened the first 600 metre (Phase One) western portion of the park in 2008. The final 500 metres of linear park (Phase Two) provides the missing link in the city’s waterfront trail and enables Torontonians to enjoy the lakefront west of Humber Bay Park West for the first time. The second and final phase was completed and opened to the public in October 2012.

Mimico Waterfront Park was designed with sustainability and the native ecology of the area as key considerations. Shoreline restoration and enhancements to terrestrial and aquatic habitats were vital elements of the park’s design. The park was constructed through a lake-filling process along a narrow section of the existing shoreline in order to connect existing local parks.

In addition to adding a new section of the very popular multi-use waterfront trail, Phase One also included the creation of shoreline, embayment and breakwater features, and terrestrial and aquatic habitat enhancements. Phase Two included native plantings and the creation of small pockets of wetland habitat between the boardwalk and shoreline that provide fish and wildlife habitat and soften the shoreline treatment.

Phase One ran east from Norris Crescent Parkette to Superior Avenue and created two small headlands, three cobble beaches, a rounded shoreline at the foot of Superior Avenue and a new section of the very popular multi-use waterfront trail. A partly sheltered embayment, a boardwalk and a sand dune feature in the backshore was created at Amos Waites Park. Terrestrial and aquatic habitat enhancement work was also undertaken.

The Mimico Waterfront Linear Park Project was developed through an extensive public consultation process that began in 1999 and included the formation of a working group, composed of private and public stakeholders. Public input and consultation continued into the implementation phase through the Working Implementation Group. 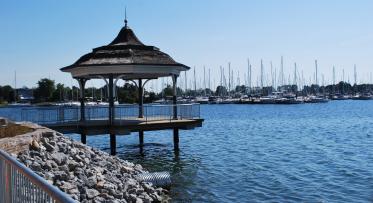 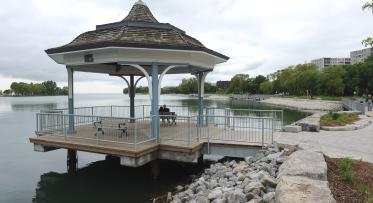 From the Archives: Mimico Waterfront Park

In 2008, residents of the Mimico neighbourhood in Etobicoke finally had access to the lakefront with Mimico Waterfront Park, after decades of being cut off from it.
Read Article
Banner 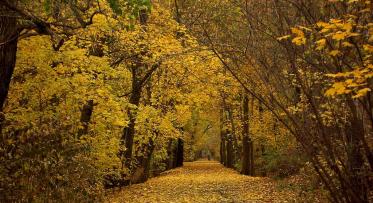 Our city boasts a diverse and extensive network of green spaces that are treasured by residents from Etobicoke to Scarborough, Downtown to North York. From the big and lively to the small and intimate, each urban park has its own unique character. But one type of park has steadily been gaining...
Read Article