We’re planning improvements along Lake Shore Boulevard between Jarvis Street and Logan Avenue. This will include enhanced sidewalks, a new bi-directional cycling trail on the north side of the street and additional planting.

Toronto’s exponential growth over the past decade has increased demands for more walking and cycling facilities, and green and open spaces. To help address these needs in one of the most challenging areas beneath the F.G. Gardiner Expressway, the City of Toronto and Waterfront Toronto have completed a Public Realm Phasing and Implementation Plan for Lake Shore Boulevard East from Jarvis Street to Logan Avenue. This Plan was submitted to and acknowledged by the Ministry of Environment, Conservation and Parks in July 2020.

The Plan will be funded through the City's 10-Year Capital Budget for Gardiner-Lake Shore Blvd. rehabilitation, and implemented incrementally in coordination with adjacent projects and development. Over time, the Lake Shore Boulevard East Public Realm Vision, Phasing and Implementation Plan will create improved connectivity to the waterfront, including safer intersections and trails for cyclists and pedestrians, new linear planted landscapes, enhanced sidewalks, and opportunities for public art.

Why do we have a Public Realm Plan?

City Council directed completion of a public realm improvement plan for the Lake Shore Boulevard East corridor in 2015 and 2016 as part of deliberations on the future of the Gardiner Expressway. Council's objectives are to rebalance the modes of travel through the corridor, and to improve connectivity between the city and Lake Ontario. In approving the Gardiner East Environmental Assessment (Gardiner EA) in 2017, the Ministry of Environment, Conservation and Parks also underscored the need for a Public Realm Plan. This Public Realm Plan and its posting on City of Toronto and Waterfront Toronto websites satisfy Conditions #3 and #8 of the Ministry's November 2017 Notice of Approval to Proceed with the undertaking of the Gardiner East Environmental Assessment.

What is the vision for Lake Shore Boulevard?

The Public Realm Plan provides a cohesive vision for nearly three kilometres of the Lake Shore Boulevard corridor beneath the elevated Gardiner Expressway.  Features of the Public Realm Plan, prepared by Dillon Consulting Ltd. and West8 Urban Design and Landscape Architecture, are consistent with the City's best practices for road reconstruction projects, including the Vision Zero Road Safety Plan .The vision includes streetscape and intersection improvements, traffic calming measures such as narrower vehicular lanes and slower speed limits, separated cycling and pedestrian trails, and seasonal plantings supported by stormwater and Gardiner Expressway run-off. These features will enhance the comfort and safety of road users and are in keeping with City of Toronto Green Streets Technical Guidelines.

The Plan specifically sets out:

Developed in consultation with a wide range of stakeholders, this Public Realm Plan serves as a guiding framework to City divisions and other public and private agencies as development takes place. It will be implemented in various phases from 2020 to 2026, with the Cherry St. to Don River segment following Gardiner reconfiguration works, and the Jarvis St. to Cherry St. section in concert with scheduled infrastructure works and coordinated with major projects in the area, including the Union Station Rail Corridor expansion. Opportunities to advance implementation of the public realm are also currently under consideration, including as part of the implementation of the new Lake Shore Boulevard Bridge over the Don River, anticipated to begin in mid-2021 and end in 2024. 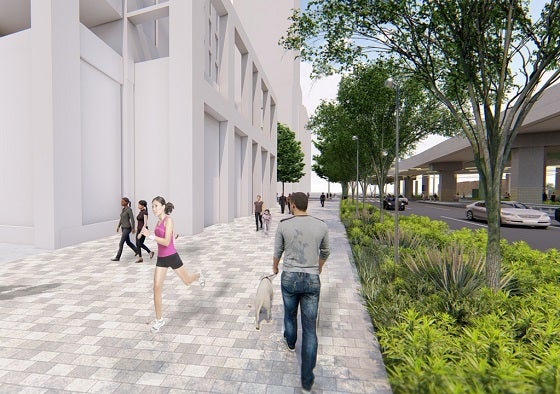 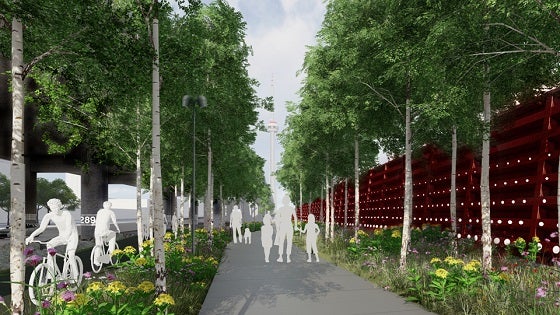 Given the long-range schedule for implementing the Plan, a series of representative public realm improvements or "Quick Starts" are to be implemented earlier to signal the coming changes to Lake Shore Boulevard East. Ten proposed Quick Starts have been identified, with four expected to be implemented in the next 2-3 years, subject to coordination with other adjacent projects, as shown in the Map below. The remaining projects will be implemented based on available funding and coordination with other projects in the area.

In addition to the Quick Starts, private development frontages along Lake Shore Blvd. East will follow the streetscape design in the Public Realm Plan to ensure consistency across the corridor.

The first Quick Start implemented in 2020 involves a section of sidewalk along the south side of Lake Shore Boulevard from Sherbourne Common to 12 Bonnycastle Street. The project will test new permeable paving and subbase materials, planting and passive irrigation to advance Green Street standards in the city and inform the detailed design of the Lake Shore Public Realm. It will evaluate how innovative materials and passive irrigation design can achieve low-impact development (LID). That means implementing systems that use natural processes to capture stormwater and filter it through the landscape instead of letting it run off untreated into Lake Ontario and the Don River.

Construction began in August 2020 and was completed in September 2020. The existing concrete sidewalk has been reconstructed using porous pavers over a permeable sub-base instead of concrete, allowing stormwater to be retained on site and slowly filter through, thereby reducing the flow of water into storm sewers. This captured stormwater is used as a resource for passive irrigation of the adjacent planting area along the curb, improving plant health and reducing the need for manual watering. Plants selected are resilient hardy species resistant to shade, wind, and salt, while adding to the biodiversity of the corridor. The intersection corner at Bonnycastle St. was rebuilt in an enhanced concrete finish with exposed granite aggregate and a decorative sawcut pattern which is to highlight pedestrian areas at intersections across the Lake Shore Blvd. streetscape. 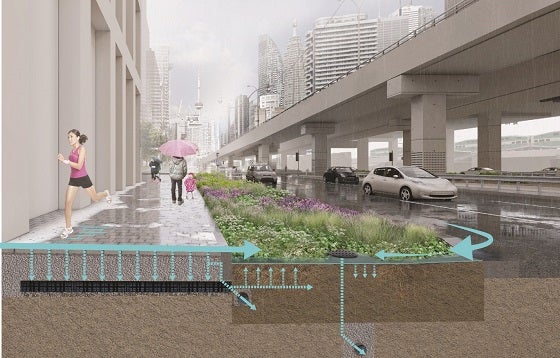 Image: An artist rendering of the South Sidewalk Pilot Project

The pilot will be monitored and evaluated by the Sustainable Technology Evaluation Program (STEP) for one year to evaluate how well these materials improve the sustainability of street plantings and management of stormwater, as well as their durability and maintenance requirements. The results of this pilot project will inform the detailed design of the full scope of Lake Shore Boulevard East. The monitoring findings will also inform the City of Toronto’s Green Streets program, contributing to the development of design standards, as well as operations and maintenance practices to facilitate broader implementation of Green Streets projects.

Image: A photo of the Implemented South Sidewalk Pilot Project

Bridging the Gap to Next Generation Sustainable Communities

Our commitment to deliver on unprecedented sustainability targets ensures that Toronto’s waterfront will be enjoyed for generations. We’re taking steps to protect the environment and habitats on the waterfront, while creating sustainable communities and public spaces.
Read Article