TORONTO – The public is invited to come up with a name for the next great waterfront park opening this summer in the West Don Lands. The naming contest by Waterfront Toronto and The Grid encourages the public to submit their ideas for a new park name, and then ultimately choose the winning name through an online voting process.

“The West Don Lands is Toronto’s next great neighbourhood, and this park is a major component of it,” said John Campbell, President and CEO of Waterfront Toronto. “This contest is a fun way to encourage everyone to get involved in our projects and waterfront revitalization.”

The park is currently known as Don River park due to its location near the Don River. The beautiful and innovative park will be the cornerstone of the revitalized West Don Lands and a year-round destination. Easily accessible by public transit, it will provide community members of all ages and abilities with a place to gather, exercise, play and socialize.

The goal of the contest is to select a name that reflects the park’s unique setting on Toronto’s waterfront in the heart of what will become one of Canada’s newest, most technologically advanced and sustainable communities.

Designed by renowned landscape architectural firm Michael Van Valkenburgh Associates, the park is inspired by the site’s many inherent assets—its strong connections to the city, its proximity to the Don River, its unique ecological history, and its position on top of the area’s flood protection landform. The design maximizes the exceptional topography and capitalizes on the unique landscape to open sightlines to the Toronto skyline, the Don River and beyond.

At 7.3 hectares (18 acres) the park is the largest in the area and will become the heart of the new community. Located between Bayview Avenue and the GO/CN railroad lines, from King Street to the rail corridor in the south, the park is leveraging essential public infrastructure to deliver a magnificent public amenity.

There are two ways you can participate – you can suggest a name for the park on the contest website at Name That Park and then you can vote for your favourite new name in the voting round.

Park names can be submitted to The Grid’s Name That Park contest website between April 11 and April 25. Proposed names should reflect the park’s strengths and advantages, for example its location in the heart of West Don Lands, its strong connections to adjacent neighbourhoods, its proximity to the Don River and the waterfront, its innovative location on top of the area’s flood protection landform, or its sophisticated approach to sustainability. Submissions must include a brief explanation of why your proposed park name should be chosen.

At the end of the submission period a selection committee made up of a broad range of community representatives will shortlist three to five names for public voting. The shortlist will also be vetted by the City of Toronto Parks, Forestry and Recreation Department to ensure the proposed names meet the city’s naming policies.

The shortlist of names will be posted on the contest website and people will be able to vote for their favourite name from May 6 to May 17. The name that receives the most votes will be declared the winner and will be announced on May 22, 2013. The winning name will be declared official following approval by the city.

Official contest rules and the City of Toronto’s Honourific and Street Naming Policy are available on the contest website.

The Grid
The Grid is Toronto’s weekly city magazine. It is a fresh, accessible voice that captures the energy of the city for people in their 20s, 30s, and 40s, reflecting the downtown lifestyle of its audience through its hyper-local focus on Toronto’s many neighbourhoods. Content, which ranges from politics, the arts, and pop culture to fashion, style, and food and drink, is always delivered in a smart, surprising, highly visual way.www.TheGridTO.com 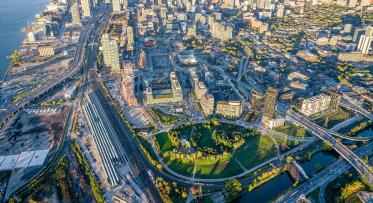